Praise be to Allaah. 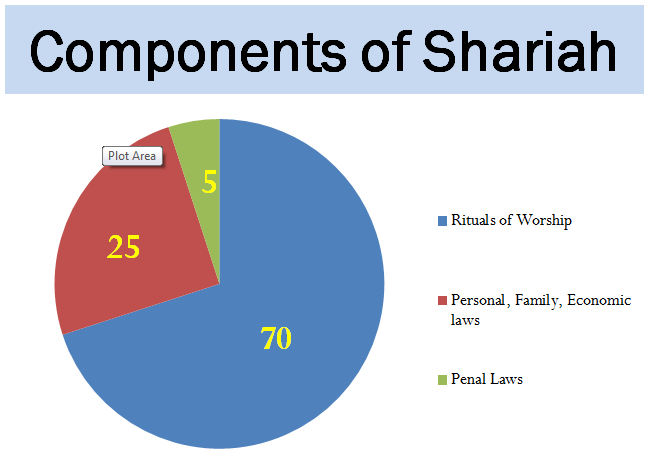 Sharia law Arabic: شريعة) is the body of Islamic law. The term means "way" or "path"; it is the legal framework within which the public and some private aspects of life are regulated for those living in a legal system based on Islam.
The sources of Islam on which all beliefs, principles and rulings are based are represented by the two Revelations: the Qur’aan and Sunnah. This is what is implied by Islam being a divinely-revealed religion: its pillars are based on infallible texts that were sent down from heaven, which are represented in the verses of the Holy Qur’aan

and the texts of the saheeh Prophetic Sunnah.

Read more: What are the sources of Islamic legislation? 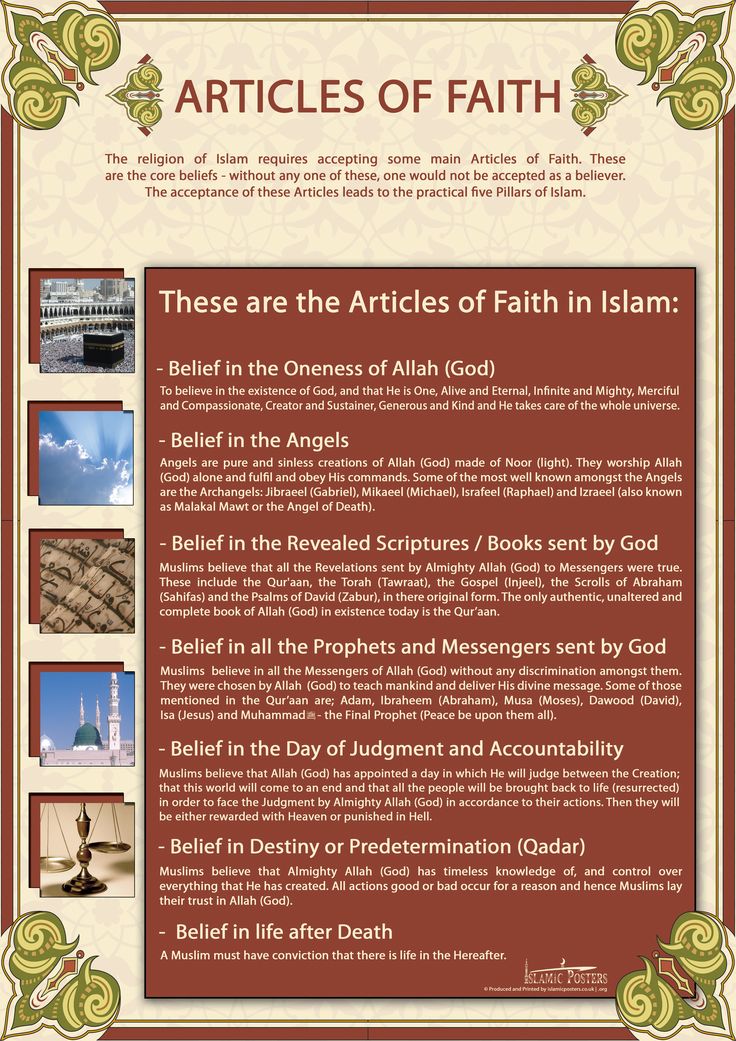 Chapter 1: The Belief in Allah

1 – Belief In Allah’s Existence Allah’s existence is affirmed through Fitrah (the innate purity that Allah creates in every human being), the Mind, the Shari’ah (Islamic Law) and the senses.

a) As for the Fitrah, we say the following: Allah created the belief in Him in every human being. Mankind needs not to be taught this belief or think about how to possess it. However, the ones who have this Fitrah corrupted will not benefit from it. The Prophet (sallallahu alaihi wa-sallam) said, what translated means, “Every newly born will be born having Fitrah. However, his parents will either convert him to Judaism, Christianity or Majocism (fire worshipping).” [Saheeh al-Bukhari]

b) The Human Mind must be used to prove the existence of Allah. All this creation, of old and new, must have a Creator who invented and started it. This creation could not have come to existence on its own or by chance. It could not have created itself, because it did not exist beforehand. Therefore, how can it create? Also, the creation could not have been started by accident or chance. Everything that exists must have a Creator who brought it into existence. Creation is magnificent in organization, coherent and correlated in its existence. There is a reason and originator behind every act. All this nullifies the saying that this entire universe was started by chance. What was started by chance cannot be organized in its form because it did not have any organization before it was formed. What makes what was created by chance to be this organized? If all this creation neither could have created itself nor was it created by chance, then it must have an Originator, Allah, the Lord of the worlds. Allah mentioned this reasoning in the Quran, “Were they created by nothing, or were they themselves the creators?” [52:35].

Read more: The Pillars of Faith 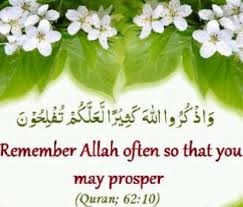 Al Imam Ibn Qayyim (RA), a well-known Muhadith (A scholar of traditions), has written an authentic book, 'Al-Waabilus Sayyib', on the virtues of Zikr, which are more than one hundred and he has listed seventy nine of these, which are briefly given below in the same order. Some of these include multiple benefits, in that case their actual number exceeds more than one hundred:
1) Zikr keeps away the Shaitân and weakens his strength.
2) It is the cause of Almighty Allah Ta’ala’s pleasure.
3) It relieves the mind from anxieties and worries.
4) It produces joy and happiness in the heart.
5) It strengthens the body and mind.
6) It brightens the face and heart.
7) It attracts one’s sustenance.
8) It invests the Zâkirs with awe and sweetness so that the beholder is filled with awe and pleasure at his sight.
9) It induces love for Allah Ta’ala, which in fact is the spirit of Islam and the pivot of Deen (religion), and the source of success and salvation in the Hereafter. He who seeks access to the love of Almighty Allah Ta’ala should do Zikr profusely. Just as reading and repetition is the door of knowledge, so Zikr of Allah Ta’ala is the gateway of His love.
10) Zikr involves Muraqabah (transcendental meditation) through which one reaches the stage of Ihsân, wherein a person worships Almighty Allah Ta’ala as if he is actually seeing Him. (The attainment of this stage of Ihsân is the ultimate objective of the Sufis).
11) It helps in realization of Allah Ta’ala so that by and by a stage is reached when he comes to regard Almighty Allah Ta’ala as his sole Cherisher, Guardian and Master, and he turns unto Him, in all afflictions.
12) It is the key to the nearness of Almighty Allah Ta’ala. More abundant the Zikr, more one will get nearer to Allah Ta’ala, and greater the indifference to Zikr, greater will be the distance from Him.
13) It opens the doors of realization (Ma’arifat) of Allah Ta’ala.
14) It makes one to realize the greatness and grandeur of Almighty Allah Ta’ala, and strengthens the consciousness of His omni-presence.
15) Zikr of Allah Ta’ala causes one’s mention in the court of Allah Ta’ala, as is mentioned in the Holy Book (Al-Qur’ân):
فَاذْكُرُونِي أَذْكُرْكُمْ وَاشْكُرُوا لِي وَلَاتَكْفُرُونِ
" Remember me, and I will remember you.” (2:152)
And as stated in the Hadith:
“Whosoever remembers Me in his heart. I remember him in My heart”. (Bukhâri & Muslim Sharief)
It has already been explained under other verses and Ahâdith that, even if there were no other good points in Zikr, except those mentioned above, this alone would have established its superiority over others. Nevertheless, there are many more virtues and benefits of Zikr.
16) It gives life to the heart. Hafiz Ibn Taimiyah (RA) says that Zikr is so much necessary for the heart as water for the fish. Imagine the condition of a fish out of water.
17) It is food for the heart and soul; to deprive them of Zikr is like depriving the body of its food.

The first Condition: al-Ilm – Knowledge: about whom we are worshipping is critical for understanding Islam.  Knowledge in Islam consists of recognizing Allah as the only true God to Whom worship must be dedicated, and denouncing all gods worshipped besides Allah as false, and that they can neither extend benefit nor cause harm.  It calls for complete disassociation from false deities and for the purification of intentions:

“So know (O Muhammad (saw)) that La ilaha illa Allah (none has the right to be worshiped except Allah) and ask forgiveness for your sin, and also for (the sin of) believing men and believing women.” [1]

“He who died knowing (full well) that there is no true God worthy of being worshipped except Allah, entered Al Jannah.” [2]

The Second Condition: Al-Yaqeen – Certainty:  that the belief in Allah must be unblemished with any doubt.

"Only those are the believers who have believed in Allah and His Messenger, and afterward doubt not but strive with their wealth and their lives for the Cause of Allah” [3]

"I bear witness that La illah illal’lah, (No one has the right to be worshipped except Allah) and I am his Messenger.  The slave of Allah who would meet Him (Allah) without harbouring any doubts about this (the testification) would enter Al Jannah." [4]

Third Condition: al-Qabool – Acceptance:  that is, to accept all the conditions of the declaration.  Adherence to the meaning of the testification safeguards the believer from arrogance which Allah forbade:

“Truly, when it was said to them: La illaha illa Allah (none has the right to be worshipped but Allah), they puffed themselves up with pride (i.e. denied it).” [5]

:  that is, to fulfill it's conditions submissively and willingly being content with Allah (swt) as the Rabb (only Lord) and Muhammad (saw) as His last Prophet and Messenger.

“And whoever submits his face (himself) to Allah, while he is a Muhsin (good-doer ie performs good deeds totally for Allah’s sake without any show off or to gain praise or fame and does them in accordance with the Sunnah of Allah’s Messenger Muhammad (saw)), then he has grasped the most trustworthy handhold [La ilaha illa Allah (none has the right to be worshipped but Allah)].” [6]

: that is, to fulfill it's requirements truthfully.  This paves the way for meaningful understanding of the Oneness of Allah (swt) and strengthens the drive towards achieving knowledge about Allah (swt).  The hypocrite utters the testification, but conceals rejection in his heart:

“They say with their tongues what is not in their hearts.” [7]

"There is none who testifies sincerely (from his heart) that there is no God worthy of being worshipped except Allah, and that Muhammad is the Messenger of Allah, except that Allah will save him from the hell-fire." [8]

: that is, to be sincere in worshipping Allah, dedicating all acts of worship to Him alone.  The intention behind the performance of any kind of worship must be purely devoted to Allah.

Say (O Muhammad (saw)): “Verily I am commanded to worship Allah (Alone) by obeying Him and doing religious deeds sincerely for His sake only.” [9]

“And of mankind are some who take (for worship) others besides Allah as rivals (to Allah).  They love them as they love Allah.  But those who believe love Allah more (than all else).” [10]

“Whoever possesses (the following) of three qualities will relish the sweetness (delight) of Eemaan (Faith): The one to whom Allah and His messenger (saw) becomes dearer than anything else: that he loves a person for Allah Alone (i.e. purely seeking Allah (swt) and His pleasure); that he hates to revert to Kufr (disbelief) after Allah has rescued him from it as he hates to be thrown in hell." [11]

The Pillars of Islam