The different types of Shirk

The different types of Shirk 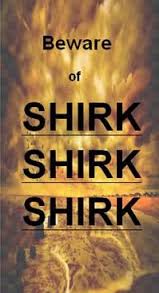 There are two main forms of shirk in relation to the actions (of the heart, tongue and limbs – which cannot be separated from one another), which is major and small shirk. Shirk in itself can be divided into three types:

The fundamental difference between ash-Shirk ul-Akbar and ash-Shirk ul-Asghar is that the first takes one outside the fold of Islaam, whereas the second does not, though it can lead to major shirk.

"They have become kaafir those who say: 'Verily Allaah is al-Maseeh (Jesus) the son of Maryam (Mary)…" (Maaidah, 5:17)

The way we can avoid committing shirk is by studying the ritual acts of Islaam (Sha’aa-ir ul-Islaam); by doing so, you will know not to do them for anyone other than Allaah, such as prayer, fasting, da’wah, slaughtering etc.

2. Ash-Shirk ul-Akbar is the greatest sin and will never be forgiven.

Those who commit major shirk will never be forgiven as Allaah Almighty says:

"Verily, Allaah forgives not that partners should be set up with him in worship, but He forgives except that (anything else) to whom He pleases, and whoever sets up partners with Allaah in worship, he has indeed invented a tremendous sin." (Nisaa, 4:48)

"…Verily, whosoever sets up partners in worship with Allaah, then Allaah has forbidden Paradise for him, and the Fire will be his abode." (Maa-idah, 5:72)

The major shirk abolishes all of your good deeds whereas ash-Shirk ul-Asghar does not.

"If you join others in worship with Allaah, (then) surely (all) your deeds will be in vain, and you will certainly be among the losers." (Zumar, 39:65)

Shirk ud-Du'aa (The Shirk of Invocation).

This type of shirk implies invoking, supplicating or praying to others besides Allaah Almighty, such as to supplicate to a dead person in his grave etc. This form of shirk is widely common in parts of Asia and among some Sufis.

Shirk ut-Taa'ah (The Shirk of Obedience)

This type of major shirk implies obeying any authority or law other than the Sharee'ah (obeying the commands of other than Allaah). If you obey any law other than Allaah it is considered to be Shirk at-Taa'ah, such as if a State makes it illegal to support the Mujaahideen or wear the Hijaab. Allaah Almighty says:

"They (Jews and Christians) took their rabbis and their monks to be their lords besides Allaah (by obeying them in things which they made legal or illegal)..." (Tawbah 9:31)

"And of mankind are some who take (for worship) others besides Allaah as rivals (to Allaah). They love them as they love Allaah. But those who believe, love Allaah more (than anything else)..." (Baqarah, 2:165)

There are many other forms of major shirk that have not been mentioned in this article. For an in-depth study of shirk and its types, please refer to Kitaab ut-Tawheed (The Book of Tawheed) by Sheikh Muhammad bin 'Abd al-Wahhaab (may Allah's mercy be upon him).

Ar-Riyaa' is any action which is performed in order to receive praise, fame or any other worldly gain. It is a form of shirk, for rather than doing your actions for the sake of Allaah you begin doing them for the sake of yourself. It is narrated in the Musnad of Imaam Ahmad and at-Tabaraani that the Messenger Muhammad (Peace be upon him) said: "The thing I fear most for you is ash-Shirk ul-Asghar (The Small Shirk). The Sahaabah then asked him: 'What is The Small Shirk?' He (Peace be upon him) replied: ar-Riyaa (showing off)."

A person must never show-off with any of his prayers, da'wah or good deeds etc. Any actions that are done out of showing-off will never be rewarded as they were done for your sake, and not for Allaah Almighty.

The Hidden Shirk can either be major or minor shirk, depending on the area in which it was committed. Hidden Shirk is one of the most dangerous forms of shirk as people cannot see that they are committing it. It is reported in al-Jaami' as-Sagheer hadeeth #4934 that the Messenger Muhammad (Peace be upon him) said: "Ash-Shirk ul-Khafie in the Muslim nation is more inconspicuous than the creeping of a black ant on a black stone in the darkness of the night." And this inconspicuous Shirk is expiated by saying thrice the following sentences within a day and a night:

"O Allaah, I take refuge in you lest I should commit shirk with you knowingly, and I seek your forgiveness for what I do unknowingly."