Fasting - Its status in the religion and some of its rulings

Fasting - Its status in the religion and some of its rulings 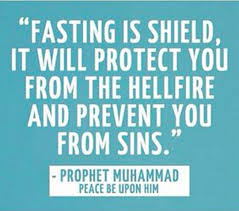 O my Muslim brothers and sisters! Fasting the month of Ramadan is one of the five pillars of Islam.

Fasting the month of Ramadan was enjoined in 2 A.H., and the Messenger of Allah, fasted nine Ramadans.

It is obligatory to start fasting the month of Ramadan by one of two things: the sighting of the crescent or completing thirty days of the month of Sha‘baan. This is based on the Hadeeth of Abu Hurayrah, may Allah be pleased with him, who narrated that the Messenger of Allah, , said: “Start fasting on seeing the crescent [of Ramadan], and stop fasting on seeing the crescent [of Shawwaal], and if the sky is overcast [and you cannot see it], complete thirty days of Sha‘baan.”[Al-Bukhari and Muslim]

Allah The Almighty Says (what means): {O you who have believed, decreed upon you is fasting as it was decreed upon those before you that you may become righteous.}[Quran 2: 183]

Ibn Katheer  said, “In an address to the believers of this Ummah, Allah The Almighty ordered them to fast, that is, to abstain from food, drink and sexual activity for the sake of Allah The Exalted alone. This is because fasting purifies the soul and cleanses it from the evil of vice. Allah The Almighty mentioned that He has ordained fasting for Muslims just as He had ordained it for those before them, who should be an example for them in that, so they should diligently perform this obligation more obediently than the previous nations. Similarly, Allah The Almighty Says (what means):{To each of you We prescribed a law and a method. Had Allah willed, He would have made you one nation [united in religion], but [He intended] to test you in what He has given you; so race to [all that is] good.}[Quran 5: 48] Therefore, Allah The Almighty Says (what means):{O you who have believed, decreed upon you is fasting as it was decreed upon those before you that you may become righteous.}[Quran 2: 183],since fasting cleanses the body and narrows the paths of the devil. In the two Saheehs of Al-Bukhari and Muslim the followingHadeeth was mentioned: “O young people! Whoever among you can afford marriage, let him marry. Whoever cannot afford it, let him fast, for it will be a shield for him.”It was also narrated in the two Saheehs of Al-Bukhari and Muslim from the Hadeeth of Abu Hurayrah, may Allah be pleased with him, that the Prophet, , said: “Allah Says, ‘Every deed of the son of Aadam [Adam] will be rewarded between ten and seven hundred fold, except fasting, for it is for Me and I shall reward it, for he (the fasting person) gave up his desires, his food and his drink for My sake.’ There are two pleasures for the fasting person: one at the time of breaking his fast, and the other at the time when he will meet his Lord. The unpleasant smell of the mouth of the fasting person is better in the Sight of Allah than the smell of musk.”

This Hadeeth indicates that every deed will be rewarded between ten and seven hundred fold, except for fasting whose reward is not confined to this number for Allah The Almighty will reward it beyond measure as He wills. Allah The Almighty Says (what means): {Indeed, the patient will be given their reward without account.}[Quran 39: 10]Al-Awzaa‘i  said, “Their reward will not be weighed or measured; they will be given an immense reward.” Ibn Jurayj  said that he was informed that their rewards will never be counted based on their deeds; rather they will be given even more.

There are three types of patience:

1-    Patience  concerning the obligations imposed by Allah The Almighty: This is fulfilled in fasting, which entails patience with obedience to Allah.

2-    Patience  in abstaining from what is forbidden by Allah: This can be fulfilled if the fasting person abstains from what Allah The Almighty has prohibited him from doing while he is fasting.

3-    Patience  concerning afflictions:This can be fulfilled by having much patience with the pain of hunger, thirst, and weakness of the soul and body. Surely, the Muslim will be rewarded for the pain that results from doing acts of worship as Allah The Almighty says concerning the Mujaahids (His Holy Warriors) (what means): {That is because they are not afflicted by thirst or fatigue or hunger in the cause of Allah, nor do they tread on any ground that enrages the disbelievers, nor do they inflict upon an enemy any infliction but that is registered for them as a righteous deed. Indeed, Allah does not allow to be lost the reward of the doers of good.}[Quran 9:120]

Abu Hurayrah, may Allah be pleased with him, narrated that the Prophet, , said: “When Ramadan comes, the gates of Paradise are opened, the gates of Hell are closed, and the devils are chained.”

This is because the hearts in the month of Ramadan are eager to do much good and perform many righteous deeds - things that would open the gates of Paradise. Also, in this noble month, the Muslim abstains from doing evil deeds - things that would cause the gates of Hell to be closed and the devils to be chained up so they would no longer be able to do what they would do on other days for they may have power over them because of the different desires of the children of Aadam. Therefore, if they abstain from satisfying their desires, then the devils will be chained up, or their power over people will weaken in this month compared to other months, or, if it is the case that only some of the devils are chained up, namely the rebellious or strong ones, and not all of them, as proven in some authentic Hadeeths.

Abu Haazim  narrated on the authority of Sahl ibn Sa‘d, may Allah be pleased with him, that the Prophet, , said: “In Paradise, there is a gate called Ar-Rayyaan, through which those who would fast will enter on the Day of Judgment, and none but them will enter from it. It will be said, ‘Where are those who fasted?’ They will get up, and none will enter [through it] but them. When they enter, it will be locked, and no one else will enter.” [Al-Bukhari and Muslim, and this is the wording of Al-Bukhari]

Az-Zuhri  narrated that Abu Hurayrah, may Allah be pleased with him, said,